# 1 In the Nation for Student Engagement 

For God. For Learning. Forever.

Samford students are among the nation’s most engaged according to the 2021 rankings published by The Wall Street Journal and Times Higher Education. The university ranks 1st nationally for student engagement, which assesses the degree to which students feel prepared to use their education in the real world, how they immerse themselves in the intellectual and social life of their college and the quality of students’ interactions with both their peers and their faculty. According to The Wall Street Journal, student engagement is deemed to be central to exceptional teaching quality and reflects “how well a university manages to inform, inspire and challenge students.” Samford’s mission to nurture students in their development of intellect, creativity, faith and personhood is fostered through a vibrant campus community, including more than 118 student organizations, intentional spiritual formation, global engagement around the world and an array of academic and co-curricular opportunities for community service. Additionally, undergraduate students complete Samford’s core curriculum, providing a well rounded foundation in the liberal arts. The result is a highly tailored educational experience that results in 97% of undergraduate alumni employed or in further study within six months of graduation.

Belief in God, the Creator of heaven and earth, and in Jesus Christ, His only Son, our Lord Engagement with the life and teachings of Jesus

Learning and responsible freedom of inquiry

Appreciation for diverse cultures and convictions

Stewardship of all resources Service to God, to family, to one another and to the community 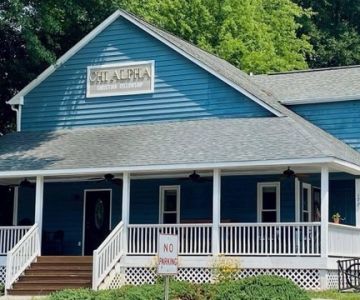 In the book Growing a Student Movement, The Development of Chi Alpha Campus Ministries 1940-2020, I included photos and reported on twenty-five XA student centers. Three new properties opened this school year and I wrote about them in an article, “What does a real estate office, fraternity house, and a church have in common?” (see  Dennis’ Blog, September 1, 2021). They are XA student centers. These properties are popping up everywhere.

Since writing about XA properties in my XA history book and in the September blog,  I discovered more new properties and several I missed. They all share a similar purpose: office space, housing, meeting place for Bible studies, prayer, fellowship meals, training, games, outreach, and special events. Everyone agrees having a place to gather can create an atmosphere for building community, making disciples, and evangelism.

The Stephen F. Austin University XA group in Nacogdoches, Texas has existed for more than 50 years. Early on the group leased space calling it the AG Student Center. In 1992 they purchased a former fraternity house to serve as a student center and housing for students. XA purchased the house for $80,000 and paid it off in 2007.

An ink drawing by XA alumnus Brent Hale of the Stephen F. Austin University Administration Building, the statue of Stephen F. Austin (known as the Father of Texas), and the two XA student centers: The first AG Student Center leased (upper right) and today’s XA House purchased (lower right), was to commemorate the 25th anniversary of SFAU XA in 1967-1992

When Joe and Holloway arrived at Clemson University to pioneer XA, they wanted to establish a XA House, but due to the geography and layout of the University, there were few opportunities to find property adjacent to the University. There is only a one and one half mile section of road on the north side of campus which has close access to the campus. The other three sides were a lake, a major highway, and a golf course. This small strip was being bought up by investors for commercial buildings.

XA was able to rent an old print shop located in NW corner for the first few years they were on campus. We had staff offices and it was large enough to host events. In 2013 the lease expired and XA had to find another place.

This is when God’s blessing opened the way to find and purchase a house (see XA in the Clemson orange box at the top of the above map). In 2014, we noticed that one of the last few houses on this strip came up for sale and we decided to investigate.

It was a 3 bedroom, 3 bath home, directly across from the university. It was listed at $360,000. With little financial collateral, we asked the AG South Carolina District to help which they were happy to do. We began a financial campaign and were able to raise money to cover the down payment, and for improvements to the house.

By year’s end, December 2014, we negotiated a purchase price of $295,000, replaced the carpet and painted the house. They added a large porch, a new entry to the office area, and spaces to the parking area. The house would accommodate four persons in the two upstairs bedrooms. The lower level is used for XA ministry, a place for students to hang out in a common area and in a converted master bedroom used for meetings, staff prayers, small groups, and game nights. The XA House continues to be the hub of ministry year to year.

Brandon Garrett and his wife moved to OSU back in 2011 to work with Destry and Cynthia Dobbs to rebuild the XA here. He served with the Dobbs until 2020 when the Dobbs relocated to Tulsa University. Brandon became the director of XA at OSU and remains there today. XA has owned the house at 331 S. Duck for 30 + years. An earlier director did a major renovation in 2008, and additional improvements were done in 2012.
Brandon explained that  “the house has been an INCREDIBLE blessing to OSU XA. It is used for student housing, offices, bible studies, leadership training, CMIT classes, prayer meetings, big fellowship events, as well as many meals. Those are all things that are happening currently. There is not a week where ministry is not happening there.”

Tulsa University has had a XA ministry at different times since the mid-1980s. They began renting a house in 2011 and purchased it in 2016. Pastors in the area led a campaign to pay for and renovate the house. The Oklahoma AG Women’s Ministries gave generously and helped furnish the house. XA received around $100,000 by way of a matching grant to retire the debt and do renovation to remodel the kitchen, add a new bathroom, and student lounge, replace windows and eliminate a wall to create a larger meeting space. Woodlake Church partnered with XA to assist with this project. Plans are underway to use the house as a staging area for outreaches, a venue for Bible studies, staff and leadership training, prayer meetings, offices, game nights, creative arts studio space, and a gathering place for weekly fellowship meetings on Friday nights.

The third Oklahoma XA house is in Edmond which has been there for years. XA has been active at Central since 1999.

Marshall and Stacy Morse have been working with XA since 2014 and direct the XA 17th Street Student Center. Topeka First originally purchased the building in 2008 and last year they set up a non-profit Washburn Chi Alpha Inc. that is on a contract-for-deed for the property. It has 27 dorm-style rooms. RDA /RAs are usually XA leaders. Their main meetings are held in the living room of the property that is directly adjacent to the Washburn campus. The university places international students in its facility.

This property has been around for a long time. Michael and Carol Mowry have served as the leaders for 42 years. No one could remember when the house was secured but it gets lots of use.

Jason was an electrical engineer for 12 years all the while he had an interest in doing XA since his undergraduate days at Montana State University in 2002. The Lord released him to do XA about 4 years ago so he did an internship and went on staff at Sam Houston State University in Texas. After serving there he went to grad school at the University of Missouri in Columbia from 2006 to 2008 and assisted with XA under the leadership of Tom and Missy Trask. Tom approached Jason Smith to consider re-pioneering XA at the University of Missouri Rolla an engineering school. Having a background in engineering gives Jason a unique perspective on ministering to future engineers and scientists. He relocated to UM Rolla to establish XA. XA purchased a building last summer and now operates it as a coffee house with office space in the basement and student rentals upstairs.

Rent or Lease.   Not everyone owns the property, but many XA groups lease or rent properties to serve as student centers. It is a great place to start. And the latest lease is with XA at Louisiana State University. Jonathan and Ali Buras have led XA at LSU for 15 years. They have signed a lease for 5 years for a property across the street from the campus and fraternity houses. It will be used for offices, Bible studies, leadership meetings, prayer meetings, and fellowship events.

And that’s the news about XA Houses/ Student Centers past, present, and future. 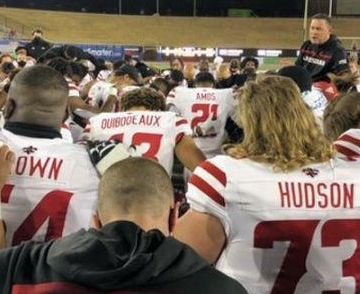 Cajuns for Christ, a ministry to the athletes at the University of Louisiana co-sponsored by Chi Alpha and the Fellowship of Christian Athletes began in 1994 when Eric Treuil, as campus minister, started a Wednesday Bible study in the athletic dorm for the athletes across every sport. The time demand for athletes is pretty intense, from workouts, practices, film sessions, and study hall, along with various other meetings. With all these demands, it leaves very little time for athletes to get involved with activities of a regular student and the reason our weekly Bible study has to be after 8pm and specific to athletes.

In 1999, the school’s coach invited him to travel with the team as a volunteer chaplain to present pregame messages. Neither players nor staff are required to attend, but Treuil says the coach is there every time, along with most of the team. The outreach to the athletes also involves weekly attending practices, going to the weight room, and being present whenever the team gathers.

Many of the athletes have committed their lives to Christ in the Bible studies, in conversations with Eric traveling to games, and at XA events. One such athlete was Charles “Peanut” Tillman, described by Eric as a devout student with no church background. Charles came to the athlete Bible study and gave his life to Christ. After graduating, he played 13 years in the National Football League, 12 of those years as a cornerback with the Chicago Bears, and played in the Super Bowl 41. In his final year 2015, he played with the Carolina Panthers.

Several athletes have followed up salvation with water baptism in the UL Intramural Center swimming pool. At an away game, Otha Peters, linebacker for UL Ragin’ Cajuns, told Eric the Lord convicted him of his need to be baptized in water, so Eric baptized him in the swimming pool at the hotel where the athletes were staying.

For 27 years, Eric has enjoyed a relationship with several of the UL coaches and a discipling and mentoring role with athletes, and conducted marriage ceremonies for athletes. About 60 XA students assist at each home game by carrying the world’s largest Louisiana state flag on the field as a part of pre-game festivities. The Ragin Cajuns ended last season, ranked #15 in the AP poll with a 10-1 record. Eric does a live pregame Facebook broadcast weekly with the film coordinator of the Ragin Cajuns Darren Walker. Also, while on road games, Eric makes it his habit to connect with the local Chi Alpha missionaries and encourage them to reach out to athletes.

Daniel and Catherine Andrew are pioneering XA at Southern Arkansas University, Magnolia, and Daniel has met with the athletes and formed a discipleship group for athletes. 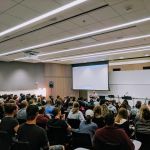